-- Working draft for upcoming book by Mark Caltonhill, author of "Private Prayers and Public Parades - Exploring the religious life of Taipei" and other works. 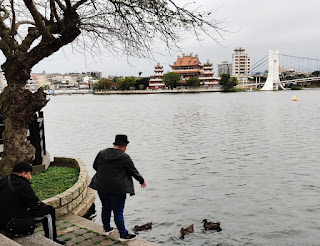 This area is inhabited predominanty by Hakka people, whose pronunciation of 龍潭 (literally "Dragon Lake"; Mdn. Long-tan) as Liung-tam is possibly of relevance to the origins of the district's (formerly township) name. Popular legend maintains that, after a period of prolonged drought, one (or more) early inhabitants in the middle of the 18th century prayed on the bank of the lake for rain, was rewarded, and so named it 靈潭陂 (Mdn. Ling-tan-pi; "Spirit Lake Bank" -- Abe Akiyoshi uses the similar-meaning 靈潭坡, Mdn Ling-tan-po, presumably because 陂 is at best obscure in Japanese). Another explanation is that the lake, which still provides the focal point of the township, was originally covered with a layer of wild-growing 菱 (water caltrop / chestnut Trapa natans), from which it was called 菱潭陂 ("Water-Caltrop Lake Bank"). In Hakka, both 靈 and 菱 are pronounced something like lin. One suggestion of how 靈潭陂 or 菱潭陂 became 龍潭陂 was simply the phonetic similarity of lin and liung in Hakka (which would have been a less likely shift in Mandarin from ling to long), [MC: perhaps because water caltrop no longer grew there or the earlier "spirit lake shrine" had been demolished]. Alternatively, the earlier legend has a coda in which, during a wet and windy night, someone observed yellow dragons within 靈潭陂, thus leading to its new name of 龍潭陂 and the town as 龍潭莊 (Longtan Township) in the Japanese colonial period. Text and photo copyright Jiyue Publications 2022
Posted by MC at 23:04 No comments:

Huadong (花東) ... Taiwan's "Flowery East" ? On some maps it appears that Taiwan has a place called "Flowery East" (花東). In reality, however, while this may represent a romantic description of this area, it is simply an alternative way to say "eastern Taiwan", a portmanteau of Hua 花[-lian 蓮 and Tai 台-] Tung 東 counties. 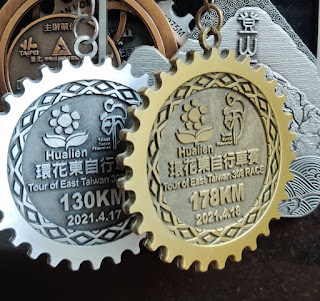 Not to be outdone, the rest of Taiwan is similarly divided into regional units: Thus Tao-Zhu-Miao (桃竹苗; "Peach-Bamboo-Seedlings") is commonly used for northwestern Taiawan's three predominantly Hakka counties and cities of Taoyuan (桃園; "Peach Garden"), Hsinchu (新竹; "New Bamboo"} and Miaoli (苗栗; "Seedlings Chestnut"), (as well as Hsinchu City), all of which conveniently contain a botanical element. With almost 4 million people, they represent around 1/6th of Taiwan's total population. Zhong-Zhang-Tou (中彰投), a rather more prosaic portmanteau representing the central counties/cities of Taichung (台中), Changhua (彰化) and Nantou (南投), is less commonly heard and seen. Nevertheless, with more than 4.5 million peiople, it represents around 1/5th of Taiwan's population, making it the second-largest of these regional city-county groups. Next, moving counterclockwise around the island, comes Yun-Jia-Nan (雲嘉南), representing Yunlin (雲林), Chiayi (嘉義) and Tainan (台南). Perhaps more recognisable is the Chia-Nan pairing, probably due to the important Chia-Nan Plain (嘉南平原), which, also including parts of Yunlin and Changhua to the north and Kaohsiung to the south, is the largest plain in the whole of Taiwan. As such it was a major incentive attracting Han-Chinese migration across the Taiwan Strait. Despite having the lowest rainfall in Taiwan, the plain is well served by rivers (although the Jia-Nan irrigation system 嘉南大圳 wasn't constructed until the middle of the Period of Japanese Rule, 1895~1945) and was the island's main center for rice and sugarcane production, which have been supported / supplanted by peanuts, garlic, corn, sweet potatoes and so forth. The Gaoping (高屏) area, accounting for more than 3.5 million people, is most recognizable to outsiders for the Gaoping River (高屏溪) that was renamed in 1960 after the two counties it ran between. The ROC's (N.B. not "Taiwan's") two outlying archipelagos of Kinmen (金門) and Matsu (馬祖), both belonging to Fujian Province are, not surprisingly, grouped together to form the Jinma (金馬).Area, to which, sometimes, the Penghu Archipelago is also added to create the Peng-Jin-Ma (澎金馬) Area. Even this, however, only has a total population of around 250,000, that is, about 1 percent of the nation's total. The Ji-Yi (基宜) region of Keelung (基隆: Mdn. Jilong) and Yilan (宜蘭) seems only to exist when meteorologists are discussing northeastern Taiwan as the area of the nation's highest rainfall. But even this is perhaps one step above Taipei City and New Taipei City (formerly Taipei County), which lacks any portmanteau combination of their names or a nickname such as "The Two Norths" (雙北) [MC: or my own attempts to promote the title "Bei Area"], and is simply discussed by the uber-prosaic "Greater Taipei Area" (大臺北地區) with a population of more than 6.5 million people. Keelung City is sometimes included in a Taipei--Keelung Metropolitan Area (臺北基隆都會區), which must further make Yilan feel like the bastard child in Taiwan's domestic relationships, as is sometimes also Taoyuan City to form the Taipei-Keelung-Taoyuan Metropolitan Area (臺北基隆桃園都會區), perhaps so that the Taoyuan International Airport can pretend it is in the capital city, which must make Hsinchu and Miaoli feel like the abandoned Hakka siblings of Taoyuan. Copyright Jiyue Publications 2022
Posted by MC at 02:18 No comments:

Datong (大同) District, Taipei City Located in west-central Taipei, with Zhongshan District (中山區), named after Father of the Nation, Sun Yat-sen (孫逸仙), to its east, and Zhongzheng District (中正區), named for former President Chiang Kai-shek (蔣介石) to the south, Datong (大同; lit. "Great Unity") looks to all the world like one of the most Han-Chinese appellations possible. This impression is further reinforced by the knowledge that the expression 大同 derives from the Zhou-dynasty Book of Rites (禮記), one of the Confucian classics, and presents a utopian vision of a world in which everyone and everything exist in perfect peace. Sun Yat-sen made frequent reference to it, it even appears in the second line of the ROC national anthem: "...以建民國，以進大同" (to build the Republic, to advance Great Unity). And yet, like Shilin (士林) and Beitou (北投) districts to its north, and Wanhua (萬華) District to the south, as well as, indeed, perhaps the majority of Taiwan place names, the name Datong ultimately derives from a pre-historic (that is, pre-colonization) indegenous language. The northern part of today's Datong District was originally a Ketagalan plains aborigine community whose name was transliterated into Chinese as 巴浪泵 (Mdn. Balangbeng; Hoklo: ?, and romanized as Paronpon) and other variants. In late-18th-century documents this was also being written as 大浪泵 (Mdn. Dalangbeng, Hoklo Tōa-lông-pōng) and, by the middle of the 19th century, as 大隆同 (Mdn. Dalongtong). During the Period of Japanese Rule (1895~1945), this was also written as 大龍峒 (Mdn. Dalongdong. In the postwar period after retrocession to ROC rule, perhaps because 峒 is a relatively obscure charaacter referring to a mountain in Gansu Province, but more so since Taipei's Confucius Temple (孔子廟) is located within this area, it was renamed Datong. That the temple is located on Dalong Street ( 大龍街) and is also known as 大龍峒孔廟 shows the continued existence and interaction of these earlier names. Copyright Jiyue Publications 2022
Posted by MC at 00:18 No comments:

Lunbei (崙背) Township, Yunlin County
In 1721, a fort called 布嶼堡 (Mdn. Buyu Bao; lit. "Coth Islet(s) Fortress") was constructed in the area of what are today's Erlun (二崙) and Lunbei townships. This was customarily known by the Hoanya plains aborigine Basjekan (tranlsiterated as, among varous spellings, 貓兒干* Mdn. Mao-er-gan, 蔴芝乾 Mdn. Ma-zhi-gan &c.) Community as 布嶼稟 (Mdn. Buyu Bing), from which 稟 was later dropped, leading to the name 布嶼堡 "Buyu Fort". The name Lunbei (崙背; lit. "Hill's Back") was later adopted since the fort, and subsequent town, was located on the back of one of Erlun's two hills (there is also an area of the township known as 崙前村 "Hill Front Village"). * The name of Vasikan prehistoric archeaological site and culture in Yunlin also derives from Basjekan (貓兒干). Copyright Jiyue Publications 2022
Posted by MC at 02:55 No comments:

Erlun (二崙) Township, Yunlin County Erlin (二崙; lit. "Two Hills") takes its name from the two small hills (丘崙) located in the northern side of today's township. Although part of the Babuza plains aboriginal hunting territory, it apparently went uncultivated by them, and during the Dutch and Zheng-family periods, and was only opened up for agricultural development at the start of the 18th century during the Qing dynasty (MOE dictionary has slightly a later date: Shizong reign period 1722~35). Copyright Jiyue Publications 2022
Posted by MC at 03:27 No comments:

Email ThisBlogThis!Share to TwitterShare to FacebookShare to Pinterest
Jiuquan (酒泉) Street, Datong District, Taipei City Literally meaning "Alcohol Spring(s)", this street's name sounds as though there might be an interesting story behind it, parhaps something about aborigines' ancestral spirits causing some kind of wine to gush spontanously from a rocky fissure on the nearby Yuanshan (圓山; "Round Hill"). Sadly, this is not the case. Rather, like a large proportion of Taipei's streets, it is named for a place in China, that is, the prefeture-level city of Jiuquan in northwestern Gansu (甘肅) Province. Founded in late-2nd century BCE as a military garrison protecting traffic where the Silk Road passed through the Gansu (Hexi) Corridor, it was originally called Fulu (福祿; lit. "Blessed [&] Fortunate"). This followed successful campaingns against the Xiongnu (匈奴) pushing southwards out of today's Mongolia by General Huo Qu-bing (霍去病; 140~117 BCE), nephew of Empress Wei Zi-fu (衛子夫), wife of Western Han Emperor Wu (漢武帝; r.141 to 87 BCE). Accounts suggest Huo wasn't particularly caring or generous towards the troops he led, but when awarded a jar of fine wine by Emperor Wu following this victory, he is said to have poured it into a stream so that all his men could share its taste. Fuli was renamed Suzhou (肅州; lit. "Solemn State") in the 6th century CE (when it was apparently the center of the rhubarb trade), before it subsequently fell to firstly the Tibetan Empire and later Ganzhou Uyghur Kingdom, which also largely practiced Tibetan Buddhism. Sometime later, the legendary story of Huo's pouring of the Emperor's wine into a stream led to the name Jiuquan becoming adopted, initially for a part of this extensive area, and then for it all. An alternative explanation is that the spring waters of this area tasted "as sweet as wine". Copyright Jiyue Publications 2022
Posted by MC at 00:18 No comments:

(intended as a rough guide only, not as an accurate representation of 17th/18th-century Zhangzhou or Quanzhou dialect spoken in different parts of Taiwan)

(intended only as a rough guide, various Hakka dialects are used in Taiwan)